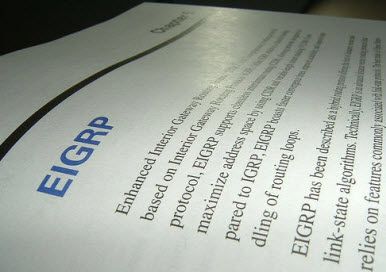 In the mid-1980s, Cisco developed the Interior Gateway Routing Protocol (IGRP), an older version of the EIGRP protocol,
an alternative protocol to RIPv1. It was 1st released by Cisco on the IOS code of 9.21. It is better than the old protocol with some added extensions.

Eigrp is a part of Distance vector protocol under Interior Gateway Protocol.

IGRP was designed to work with multiple routed protocols including IPv4, Novell IPX, and AppleTalk. It shares many operational characteristics with RIP. It’s a classful distance vector routing protocol that periodically broadcasts it?s complete routing table.
Split horizon with poison reverse, triggered an update, hold down timers are used for stability.
Unlike RIP, it uses IP layer protocol No 9.

Like RIP, IGRP broadcasted a Request packet out all IGRP-enabled interfaces at startup and performed a sanity check on received Update packets to verify that the source address of the packet belonged to the same subnet on which the Update was received.

IGRP update timer is 90 seconds with a random jitter value of 20% is subtracted to prevent update timer synchronization. When a route is learned 270 second is set as an invalid timer or 3 times of the update timer. The flush timer is set to 630 second, 7 times of the update timer. Each time the updates are received, the timers are get refreshed. If the invalid timer expires before receiving any update, then the route is marked as unreachable till the flush time get expired. After that the route will be deleted from the routing table.
As IGRP uses 90 secs as update timer compared to 30 secs in RIP, it uses less bandwidth for periodic updates.

Bandwidth is calculated in Kbps.
Default times can be changed with the below command:
timers basic update invalid hold down flush [sleeptime].

Drawbacks in IGRP compared to EIGRP

In 2013 EIGRP was published as an IETF Internet Draft, a precursor to an RFC; the document name is draft-savage-eigrp. So, it?s no longer a proprietary protocol of Cisco. An open source EIGRP implementation based on the Quagga routing platform already exists and is being actively developed. Eigrp uses the metric as the IGRP.

Eigrp uses Diffusing Computation and route calculation is performed among multiple routes to get fast convergence while remaining loop-free in every instance.
Updates are no longer sent periodically. It?s partial and bounded. Updates are sent when a metric or topology change occurs.
Eigrp is a classless protocol, variable-length subnet mask can be used. Not only the sub-netting, but also for the address aggregation summarization of a group of major network address can be used.

Eigrp uses the same formula to calculate the composite metric, however, eigrp scales the metric component by 256 to achieve finer metric.

By default, EIGRP uses 50 percent of the link?s bandwidth to share the routing updates. By the below command, we can change it.

If you are not happy with the self-learning, still you get confused, How to learn Real Networking you can hire our Trainer, We provide CCNA online Training, CCNP Training & CCIE Training too.